Visible difference is NOT a source of entertainment

Images of people with visible differences have been stolen and used on YouTube to exploit, belittle and dehumanise in order to entertain weak-minded people. Amongst them is our daughter, Mui, who was born with Harlequin Ichthyosis and who was abandoned at birth and Hunter who was also born with Harlequin Ichthyosis. The Ichthyosis community and others with visible differences have every right to feel angry that images were stolen and used in a “shock” video on YouTube.
Mui says, ‘I don’t know what’s worse, this or being cyberbullied?’
This is why we've started this petition:
http://www.ipetitions.com/petition/end-shock-videos 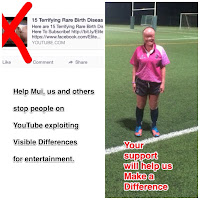 Because cyberbullies drove Mui to the brink of suicide.
Hunter says, 'I am an advocate for people with visual differences and this video does not represent anyone with visual differences in a positive light.'
Our daughter and Hunter have not been raised to be a source of entertainment for weak-minded people.
These videos are not informing or educating, they are exploiting and bullying and dehumanising. It is discrimination. Is YouTube no more than a modern-day Victorian freak show? Is this what YouTube CEO Susan Wojcicki wishes to represent?
What Susan Wojcicki and YouTube are doing to safeguard people’s rights clearly isn’t working.
Help us STAND UP against these “shock” videos by showing your support and signing this petition http://www.ipetitions.com/petition/end-shock-videos in support of Mui, the Ichthyosis community and anyone with a visible difference in order to ask: “What more is CEO Susan Wojcicki and YouTube prepared to do?”
Posted by Rog Thomas at 23:03 1 comment: 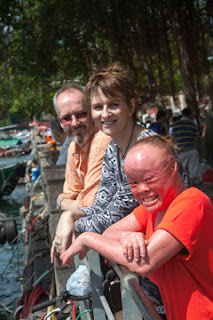 During holidays in summertime, while a student studying Economics up in London, I worked on building sites in Wales.


One man sticks always in my mind. A labourer. A lean man, and short, and always a Monmouth cap pulled tight on his head. All bone and gristle with a grip of steel. Mixed race and rightly proud. From the docks: ‘Tiger Bay’, as if that explained everything – and it did! A wise man, too.


In the site canteen. Morning break. A hastily made homemade sandwich collapsing between the fingers of one hand. Being teased for reading A Child of the Jago and taking notes. And then a clanger dropped. My crime? Using language unbecoming of a building site! And a brickie mocks me mercilessly: ‘Disposable income! Bugger me! There’s posh you are. Disposable bloody income! Me, I calls that beer money! Disposable income? Bloody students!’


Monmouth cap smiles reassuringly. I pick up a tabloid newspaper to paw the tits and bums.


Beyond Page 3, James Brown, the Godfather of Soul’s been arrested. An innocuous crime. ‘How come a man like that can be arrested,’ I say, ‘how can that happen to such a man?’


In a Cardiff accent, soft and raw, Monmouth cap smiles at me and says in his warm calm way: ‘He’s just a man, Roger. Just like you and me.’


Endeavouring to help others by publishing a book about ourselves, revealing our private lives, is a bit like pulling down our pants in public. Privates on Parade. And parading either cowed or with the organ-proud, engorged-proud pride of the Maharaja Bhupinder Singh. Or better, somewhere in between.


Fielding phone calls from reporters; requests made for talks from schools; photographers and cameramen shooting shoots. Articles in Sai Kung and Hong Kong and in Germany, in the UK and America, too.


More than one friend’s said: ‘You guys are famous, now!’ And not all speak with grins.


On Facebook, meaning well, a woman calls my daughter: “An Earth Angel” .


I thought of Monmouth cap: He’s just a man, Roger. Just like you and me.


We three, Tina, Mui, me, are ordinary people who’ve encountered extraordinary moments Good, Bad and Ugly and have coped as best we can, as in life we all do.

Our book is about an ordinary family: “just like you and me”.

FOR MORE:
Do check out our Facebook page: https://www.facebook.com/GirlBehindTheFace 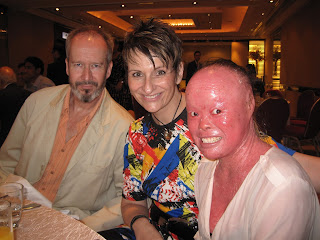 Why are we, as parents, still so deeply involved in our 22-year-old daughter’s life? Because she’s asked us to be.


Our daughter, Mui, has a very rare skin disorder. Most born with it die in childhood. She survived. It was a struggle. It took the courage of my wife to make Mui strong when everyone else turned the other way.


Then cyber bullies wanted Mui to kill herself.


Eventually, she batted away her suicidal thoughts.


But as a result of cyberbullying we’ve written a book. The “how and why” two ordinary people adopted an extraordinary child; and what we three have overcome before and since to still be here today.


We have no one to help us find a publisher besides our band of Facebook friends. But we’ve raised a daughter to adulthood alone and against all odds, so together we will soon get our book on the bookshelves. We welcome and appreciate your support.


This TEDx video is a response to the cyberbullies who wanted Mui dead.


Cyberbullying can happen to anyone.

Please contact us if you have any questions or visit our website: http://thegirlbehindtheface.weebly.com
Posted by Rog Thomas at 22:23 No comments: