Sir David Tang & the “monster” on the bus. 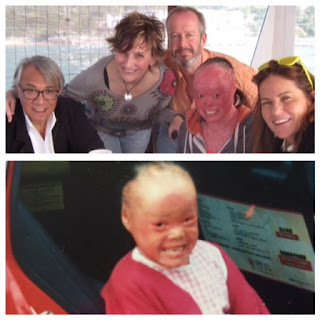 ui’s de facto godfather, died this week. He’d been fighting cancer.
In the forward to our book The Girl Behind The Face, David writes of us as a family: “I am an admiring friend.”
Well, we’ve admired David since the very first day we met him; the day he changed one vile act of discrimination, into something very, very good. The day he changed our lives.
When Mui began at international school, she had to go by bus. Tina booked a seat for the coming term. The first evening, Tina received a phone call from a woman from the bus company.
‘I saw your daughter, today,’ the woman spat down the phone, ‘your daughter looks like a monster… She’ll scare all children… She will never go to school on my bus…’
No one offered help; people looked the other way. Unstable health meant Mui’s life hung in the balance then and Tina and I were coping together alone; no time to fight vile discrimination.
Mui was banned from the school bus and there was nothing we could do. It was a devastating moment. We shielded her from the truth and moved on.
Three years later, Tina received a phone call from a man we’d never met. An eloquent English voice asked: ‘Is that Tina?’
Tina answered, ‘Yes.’
‘I’m David Tang. I’ve heard about you and your family. I’d like to meet you, Roger and Mui. Can you come to the China Club on Wednesday?’
On Wednesday we made our way to David’s private club.
David’s humour was immediate, outrageous and fun and he had Mui in a fit of giggles and Tina and me laughing out loud from the off. And he wasted nobody’s time:
‘What’s this about a school bus…? Right, let me sort something out… How about a taxi back and forth to school…? You find a driver… I’ll pay…’
The following Monday, taxi driver, Mr Lee, became Mui’s twice-daily chauffeur.
One reader of our book wrote after reading the chapter in full: “Sickening to read these hurtful, ignorant comments but how good was D. Tang! Fantastic.”
And that same evening David did a second fantastic thing for us. Trips, parties, lunches, dinners, a medical conference in Seattle and so much more... down the years, David and Lucy, his wife, have done so many huge and big and small “fantastic” things for us.
On Mui’s 21st birthday, a day doctors said she’d never see and we would never celebrate, we celebrated together with David and Lucy, on Sir David’s boat. It created another magical memory on such a special family day. Later in the afternoon as Mui opened presents and David told funny and mischievous stories, we sailed past the hospital on Hong Kong Island where Rog and I first met Mui and where we’d celebrated Mui’s second birthday – our first together. The distance travelled between both birthdays was lost on neither Tina nor me.
David has been a larger than life figure in a great many people’s lives and it has been a privilege to be called a friend by him and to call him our friend, too. So please keep Lucy (Lady Tang) in your thoughts and prayers, right now.
So many happy, funny and fun afternoons and evenings. We shall miss David greatly.
Thank you, David.
Rog, Tina & Mui Thomas (The Girl Behind The Face)

By Rog Thomas
Please help us continue to challenge attitudes and fight discrimination:
Our website: http://www.thegirlbehindtheface.com/media.html
Our Facebook page: https://www.facebook.com/GirlBehindTheFace

Please leave a comment.
Posted by Rog Thomas at 07:19 2 comments: