Once upon a time in… Hong Kong 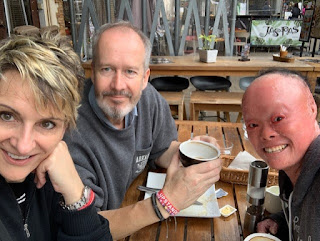 (The voice written in below is Tina’s, from a memory she shared)

Ah Chung was a giant yet only five-foot tall in flip flops that were so much too big for his feet.

He wore an old black sweater and old black pants. His face was brown and mottled, the skin stretched taut and thin. His “Fu Manchu moustache” was wispy grey, his hair silvery like a poet’s, and bristly eyebrows shaded eyes sunk deep in leathery sockets.

Sat hunkered on his haunches on the pavement, Ah Chung was a beggar, by which is often meant subhuman and invisible like a ghost. Ah Chung was a man.

On my way to work, I met Ah Chung each morning with a cheery: ‘Jo sun!’ and a smile as I do anyone. He acknowledged me with a crinkled toothless grin. Most days I gave him a soft drink or a sweet bread roll from a local shop; I often gave him money.  When I asked him his name, he said, ‘Ah Chung.’

If Ah Chung wasn’t at his begging pitch, I’d tell a friend at work that I was concerned. She’d laugh and say: ‘Aiyaah! Why always you are talking to beggars. So crazy!

One morning typhoon signal number 3 was raised. Monotonously fell the rain in squally showers. I struggled in the street with my collapsible umbrella which crumpled quickly in the wind and rain.

Ah Chung sat on his haunches beneath a building’s concrete ledge. I waved and when he saw me he beckoned me. His smile came from somewhere deep inside and he unfurled a huge green and black umbrella and pushed it to me in place of mine. I offered money; he refused. Instead, he squinted at the pouring rain then poked his chin at me: ‘Leng loi!’ he said – pretty girl.

My friend called me a crazy gweipo, when I told her I was touched by Ah Chung’s act of kindness; she moaned that I’d get germs from touching something from a beggar, so I teased her.

Ah Chung disappeared not long after.

My friend explained matter-of-factly that he was a sickly old man and probably dead. She said if Ah Chung had been a good man during his lifetime he would come back as a better person in the next. It was her belief and not for me to judge.

Ah Chung had nothing, yet when he saw I was in need, he found something to give. He stood up for me.

We all need to stand up for others, especially so in times of need, like now.

Rog Thomas
For more on why we are sharing our Family Initiative please check out our website: https://www.thegirlbehindtheface.com
Liking our Facebook page would help us tremendously. Numbers grow awareness. They bring greater attention to our core message: “Standing up for Others”
https://www.facebook.com/GirlBehindTheFace
Please leave a comment
Posted by Rog Thomas at 18:41 No comments:

“Climb the mountain so you can see the world, not so the world can see you,” David McCullough 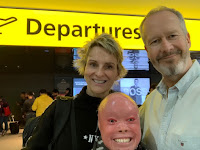 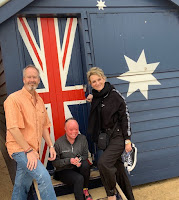 Arriving in Australia 25 years late, Tina felt like kneeling, like the pope, to kiss the ground; it meant so much to her.

When caught up in the early years of Mui’s catastrophic health scares, when we still dreamed of new beginnings in Australia, before we stood up for Mui and adopted her, Tina wheezed and coughed. She visited a doctor in Sai Kung.

Proudly, Tina showed the doctor a photograph of Mui. The doctor’s stare lingered before finally she looked up. ‘Don’t give this child all of your love, Tina… She’s a heartbreaker… Getting involved with this child will be like a very bad roller coaster ride… Forget about her, Tina, and go and make a baby with Rog…’

25 not entirely uneventful years later, we made it as a family to Australia!

Invited to share our Family Initiative at a conference in Melbourne but without the funds to travel, Cathay Pacific (3 business class return tickets) and SINO group stood up for us.

Of the conference, Melissa Muir, of the U.S. District Court, Seattle, writes: “Amazing Mui and her equally amazing parents Tina and Rog presented a powerful reminder of why we work to stop bullying.”

Of the conference, Dr Lorraine Sheridan, President, Asia Pacific Association ofThreat Assessment Professionals writes: “Mui, Tina and Rog… received a standing ovation and all of our members were deeply moved and inspired. We all need to be reminded of the terrible human cost of bullying.”

Too often, people believe they know how others should behave in a crisis or how others should respond to trauma; too often parents of children with special needs eat, sleep and live in the moment. As Tina’s mental health and mine has declined from 25 years of crisis management standing up for Mui and each other, a psychologist in Australia has stood up for us with counselling via Skype. She helped arrange two further Family Talks for us in Australia, at a synagogue and at the charity, Courage to Care.

Tina says: “Being of Jewish heritage is a very important part of my identity. The Nazis did more than kill my birth-family, they destroyed my past. People looked the other way. It is so important to stand up for others, and remember.”

Rabbi Shmuel of Elwood Shule writes: “Thank you Tina, Mui and Rog Thomas – The Girl Behind The Face – for your inspiring, moving and empowering presentation. Thank you for sharing your very personal story of courage, resilience and positivity in the face of unspeakable discrimination, hate and rudeness. You are a remarkable family and are literally changing the world for the better.”

Mike Zervos, CEO of Courage to Care writes: “We had the privilege of having Tina, Rog and Mui Thomas share their family story at Courage to Care. The family shared the many stories of the prejudice and discrimination they have endured. Frankly we were shocked at the appalling way some people react and behave.  The audience was enthralled by their positive attitude and their message that each of us can make a difference.

The doctor in Sai Kung was right, it’s been a “roller coaster ride”. She implied that standing up for others was not worth the effort; that we should forget all but self.
Mui’s skin disorder, her autism spectrum, are wrapped up and forgotten in her contagious, winsome smile. She says: ‘I trail walk, I hike, I run, I do yoga, I referee rugby and I fitness box. I love to have fun.’

Is standing up for others worth it?

You need not ask. It is.

It’s why we want a publisher to publish our family book – modelled on and fleshing out our Family Talks – to be able to continue building a platform to be a support to others.

For more on why we are sharing our Family Initiative please check out our website: https://www.thegirlbehindtheface.com

Liking our Facebook page would help us tremendously. Numbers grow awareness. They bring greater attention to our core message: “Standing up for Others” https://www.facebook.com/GirlBehindTheFace
Please leave a comment
Posted by Rog Thomas at 19:52 2 comments: