Strong Women… just get on with life 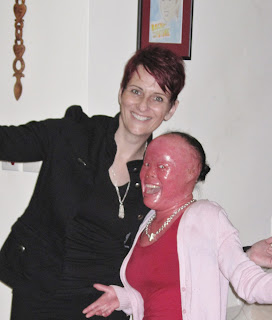 ‘You always judge a man by how he deals with adversity’ is a not uncommon quote.
Women though, in my experience, tend just to get on with life.
When my favourite aunt needed to get from her village to another in the 1920’s but found no means of transport, she bought a small motorcycle on the spot and rode there. She stood up to my grandfather, too, whenever he put a member of the family down. When her fiancée was killed in World War One she never married. She just got on with life.
When my grandfather denounced my mother and my father on the doorstep of his apartment in front of my mother and my brother and me, my mother wiped away her tears, came home and made dinner. She just got on with life.
The first time Mui was rushed into the hospital emergency department with a severe chest infection when we were her volunteers, a nurse told us we were not allowed to be with Mui because we were not family. Tina stood her ground for over forty minutes and refused to leave the hospital. Finally the hospital staff relented and allowed Tina onto the ward. Mui was withdrawn and small on her bed, and suffering. The moment she saw Tina, her face exploded with delight. Each time after that when Mui was rushed into hospital, Tina, for two years as a volunteer and from then on as a mother, slept on the floor beneath Mui’s bed so as to be there for her. No beds were provided, no mats were allowed. After months of hospitalizations, I convinced Tina to come home for a few hours each night to sleep before returning each following morning before dawn to be at Mui’s side when she awoke.
Johnny Depp is the parent of a child who was once seriously ill. He frequently visits sick children in hospitals. The actor says: “The kids, bless them, they are so strong… they are so courageous. But the parents are the ones who are slowly dying.”
As a father, I would never belittle the role men play in their children’s lives or in the lives of those they help as volunteers. Men do get judged on how they deal with adversity.
And women? There have been days and weeks and months of adversity as Tina and I’ve raised Mui. There still are. Yet Tina has never complained about her own needs or on what she has missed out on. She has never expected help or support. She just gets on with life, as strong women do.
She’s made me a better person. She is my inspiration.
And now there is my daughter.

If you want to join us in building a platform to raise awareness of visible differences, cyberbullying and commitment you can do so by clicking “Like” at the top of our Facebook page The Girl Behind The Face and by sharing it with your friends.
Our Facebook page:
https://www.facebook.com/GirlBehindTheFace
Do visit our website: http://thegirlbehindtheface.weebly.com
And subscribe to our channel on YouTube: https://www.youtube.com/channel/UCxPU0NBQ4ty6pCTStBVPw0g
Posted by Rog Thomas at 21:22 No comments:

Here's why a vote for Mui matters 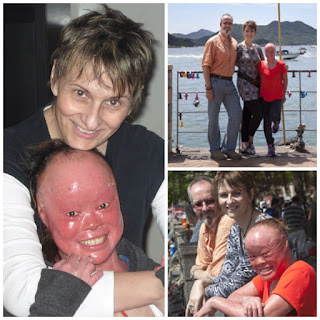 When hope is done there’s always action. When action is done there’s always help. When help is done there’s always love. And come what may there’s always Mum.
How odd to watch a TV medical drama and to, in seconds, relive a moment when a preteen daughter’s body dangles grey and limp and lifeless from her mother’s arms. A moment when all hope’s extinguished – just when hope is needed most – and as her parents we both think this time our daughter’s gone.
Yet still the mad dash to find the ambulance that’s got lost; the mother’s calm refrain: ‘Please God, don’t let Mui die’; the mad dash in the ambulance to the hospital; the calm resolve of doctors doing what doctors do. Hour after hour, till finally hope seeps back and the memory gets flagged up to be suppressed.
Till unexpected moments when the memory bubbles up and briefly floods the mind. But always there is the laughter and the joking to wind the lock gates shut.
Always the morning after the night before is just another day.
Life always carries on… come what may.

Our daughter says: “I still find the idea crazy that two people who only wanted to volunteer for a short while ended up scrapping their future plans to raise me. That shows some pretty amazing selflessness. But I'm happy they did.
And I will never be able to understand how my mum and dad managed to keep me alive, especially when knowledge of Harlequin Ichthyosis was so little back then. But because of them, I’ve been able to grow up and hopefully lead a normal life. They’ve done an amazing job and even if I don't always show it, I’m lucky!”

To vote for Mui in the Spirit of Hong Kong Awards click under her photograph on this link: http://spiritofhk.scmp.com/vote

Our website: http://thegirlbehindtheface.weebly.com
Posted by Rog Thomas at 00:40 No comments: